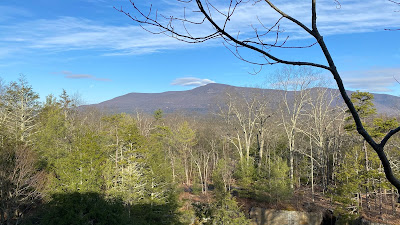 Back in the innocent days of early January, we were in Arizona when we first heard about the virus in China. It sounded bad, and it fit in with something I had been saying for years before and after Trump was elected to people who thought he was somehow a reasonable alternative to your everyday politician. "

"What is going to happen when there is a real disaster in this country? He is going to kill us all, and he is not going to care."

Of all the predictions I have ever made (someone I'm convinced every spring that this will be the year that the Mets go undefeated) that is the one I so wish I was wrong about.

I don't know if I am going to survive this but the day the door opens to the world and I can go out safely is the day I go to work for whoever it is that is opposing Donald Trump, and I won't stop working until the day after the election.

There has been a sea change in the administration's language the last couple of days, and I have no doubt there is a reason why it has coincided with my blood pressure going up to 180. It started Sunday when Trump said that he just heard that 2.2 million Americans could die (the rest of us heard this two weeks ago when the British Imperial projections were first released and published on the front page of The New York Times. Next he said, he was extending the guidelines (after five days of pounding twitter and Fox with, "The cure is worse than the disease") and that if Americans follow the guidelines, "only" 100,000 to 200,000 Americans will die," and "we" (meaning "him") will have done a pretty good job. If it fails, and the numbers go higher, it is our fault.

Then, he compounded his despicable statement by bragging about his ratings being higher than the Bachelor Finale.

How does anyone in this country have blood pressure lower than 180?

How is it that this election in November won't be a shutout,  even if the Democrats nominate Elmer Fudd?

How did he make that statement, and Mitch McConnell and Chuck Schumer didn't get together and say they are working together for the immediate removal of the President of the United States to save the lives of millions of Americans?

How is that not possible?

Well, the answer came last night. When Trump again said people should  be appreciate that he personally is keeping the death toll so low and by the way, this would never have happened if the Democrats hadn't impeached me, a line he echoed from Mitch McConnell's comments earlier in the day. He also read a line written for him that Americans have to prepare for a rough two weeks, and t his is the one that gets repeated in the news, as if this was some new sober declaration by Trump and as if it mattered at all. Don't they understand that it's just some new posture he's trying out like a new golf outfit to see if it fits so he can use it in his reelection campaign?

Yes, he understands how Americans were sacrificing their lives and how tough it was for him because he too is sacrificing. He hasn't played golf at Mar-a-Lago for two weeks.

We are now going to be subject to the big lie for the next four months, that he
1) knew about this from the beginning;
2) was aware of its seriousness before anyone;
3) is not responsible for a single death; that he took all the appropriate steps; including reforming a terrible system that he was handed
4) is not responsible for the high numbers; they are not his fault but the fault of the American people and their local representatives -- especially underappreciative Democrats who were responsible for this supporting impeachment
5) is not responsible for equipment and testing shortages6) that he personally should be credited with great leadership that will keep the death toll down to an acceptable 200,000, if Americans listen to him.
6) that he should be re-elected, if there are elections, because he loves the American people and knows more about science and the pandemic and the economy than anyone.

This is the message that will be hammered into the public's psyche every day, and even while every American will be affected by the Holocaust that he visited on us, there will be those who will believe his lies, if only because they will hear them day after day after day and they will hear things like "the president's sober words" parroted by his pets, the VP, Birx and Fox.

It is all spin. (His campaign has even produced a video about his great leadership. I won't link to it here, though, as just the very act would put my blood pressure over 200)

At the very least, we must counter the lie by knowing the truth, by being able to respond, by being angry and when we can, uniting to defeat him.

Here to start is a list of articles that counter the big lie. Read them, spread them around, use them as talking points when someone tells you he's doing a great job. I hope all of us are around to take him on when, if, we can go out in more safety. I hope there's a masked march on Washington in honor of the dead and sick. I hope I'm alive to participate.

If not, here are some links that tell the truth.

Stay safe, for you, for your family, your friends and to kick this guy and his cronies out of Washington in November. 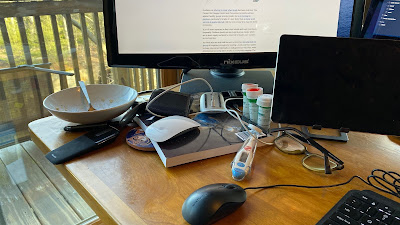 The Washington Posts tracks the history of Trump's statements on the virus.

While the Trump administration says they were on top the virus from the beginning, this New York Times investigation shows how testing was delayed until it became too late.

The White House was warned about a pandemic in 2019.

In fact, they were warned several times

Dana Milbank calls out the president for his latest projections

The Washington Post's fact checker column is a great source. Here is one link, if it doesn't work or isn't updated, do a search on the Post site for Glen Kessler or the Fact Checker

Aside from his reelection, this is what Trump administration is all about when it comes to the virus

Here is a timeline, laying out the administration's slow response to the virus