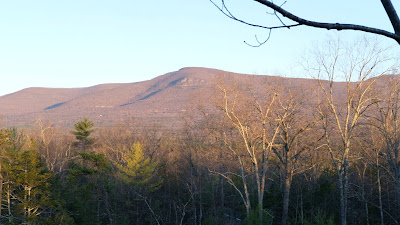 It hasn't been a great week. I don't know of anyone who thinks that it has been, except for Trump who expressed his pleasure at his own efforts again last night to keep the potential death toll under 100,000 — a number that we all know now is useless and seriously under-reported —  that and the erections he gets on the podium every time someone uses the word "models," which is several times a night. Contrast that with Andrew Cuomo whose consistent message is that every life is precious. As for me, well, I've been sick all week and I can't seem to shake it. I'm sure it's not CV, which is both good and bad news; good because as the new ventilator-assignment guidelines indicate , I'm on the list of people who don't get one when the inevitable shortage occurs because the numbers tell them that a 65-year old with heart trouble isn't going to make it anyway. And if it's not CV, and if my inability to walk up our hill without stoppi
Read more

Post #18 - The First Loss and a Friend on the Frontlines of Research (thank you, Lorne Michaels) 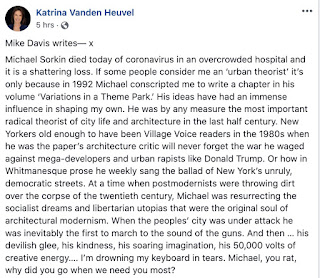 In 1926, I was a 26-year-old writer in New York when there was a call for a Second Writer's Congress. Because of my work on the Hiss case, I recognized a lot of the progressive face who showed up. One of them was Howard A. Rodman who also worked in my office of the National Emergency Civil Liberties Committee. At one session, Howard invited me to sit next to him and he  introduced me to his companion who was a very smart, funny and gracious guy. That was Michael Sorkin, one of the top architectural critics in the country. He was then writing for The Village Voice. Years later, when he was writing for The Nation, I was doing its educational program, sending the magazine to schools around the country. Whenever I would see a Sorkin article, I would jump for joy, because it was always so smart, edgy and provocatively written. Last night came word that this funny, gracious guy died in a crowded  hospital room. I only met him a couple of times, but I still see him in my mind; he's
Read more

There were 782 deaths from covid-19 around New York State yesterday. That number has been steady all week. Total deaths in the state long ago exceeded 10,000. Around here, there is little evidence that there is a killer in the air. Oh, there are some packages of food in quarantine by door, and maybe our quiet country road is quieter than usual but other than that the neighborhood looks the same. Change here in the country happens at a snails pace.  Excitement on our walks is noticing that a neighbor has painted his mailbox a new color or that there's a squashed frog on the road in front of No. 37. Even in good times, we never see that many people, and now we see even fewer. Those we do pass will say a brief hello. It's the sadness in their faces or their willingness to step further to their side of the road that is a tacit acknowledgement that they recognize that despite the hardships — and this is no wealthy suburban street — we're all in this together. That's why it
Read more